I know I'm not breaking any news here, just stating the obvious.

When Patricia left us, October 10, 2019, I was alone.  Sure friends and family checked in and were concerned, but they had their own lives and their own set of problems.

I was alone for the first time in my life. I had gone from my mother's apartment in Cicero to our first apartment in Westmont after Pat and I got married. I never went away to school or moved out to live in an apartment.  I now found out what real silence was. What it was like to truly be on my own.

Our home was a constant reminder of the thirty eight wonderful years we had spent together.  Every picture, every item in every room was something Pat had bought to make our house beautiful, unique and OURS!  Now each of those items was a reminder that I was alone.  It took a while before I began to accept that it was time to "move forward" and get on with my life.

Work helped, but I have just worked weekends the last year or so, so it left plenty of time for me to hang around the house alone. Covid didn't help. I haven't seen most of my best friends since March of last year and my brothers and sisters have tried to stay safe after both I and my brother, Barry, contracted the virus. (We are both fine, my brother's being worse than mine.)  We did a few backyard fire pit get togethers, all socially distanced, which was nice.

Covid also gave me an idea. Since I was by myself, I thought maybe others in similar situations, also alone, might want to get together, safely, for some companionship, the ability to talk with someone else in real life.

I knew it was no time to try and meet new people. At sixty three, establishing a relationship from scratch would be difficult.  I went for a few meals with some of Pat's friends and co-workers, but as hard as I tried, after each one, after reminiscing about my wife and their friend, I was still alone, thinking about all the good times.

I reached out to a few women I had known in the past, the long ago past. Forty or more years ago, a couple from high school and one from just after high school.  Each had experienced their own lives and memories over the four decades, two were widows and one a divorcee.

They were all receptive to the idea of going out for lunch, a breakfast, a walk in the park, just some companionship and conversation with me. A hug hello and a hug goodbye and I had three very special  friends. It was wonderful for me and I hope for them.

I started enjoying myself. I laughed. I smiled, We discussed our lives with our spouses and how it was moving forward. Some of the conversations were difficult, but we could relate having gone through similar things.

After a month or two of getting together and getting to know these lovely woman, I began thinking that maybe, just maybe, I could find happiness again. I never was looking for it.  After losing Pat, I expected to work a bit, travel a bunch and hang with my long time friends whenever I could, but the pandemic changed all those plans.

On August 27th, I took one of these woman, Lynda, downtown for dinner.

Pat and I had a Gold Coast condo that overlooked Gibson's, Tavern On Rush, Carmines and a park referred to as "The Viagra Triangle", (the old men used to head down there to look for some young lady friends).

We sat in the park for a hour or so, had a lovely dinner at Tavern On Rush, shared a wonderful dessert, and headed back to the condo.  I showed Lynda the rooftop and as we were looking at the beauty of the city, I asked for a kiss.  Now up until this time, I had made sure that we were going out as just friends, but at that time, I realized that, if Lynda was interested, I would like to become a closer friend.

She was very surprised I asked for a kiss, shocked I would say. It was wonderful.

Since then, Lynda and I have developed a close relationship, seeing each other three to four times a week. Our close friendship when we were younger had allowed us to feel comfortable with each other and it has been great.

It is wonderful having a “somebody”! Someone who loves you and also can call you out on the stupid things you might do or say, and with me, they are plenty. Pat used to be good at it.

Things have progressed quickly for Lynda and me.

We are both in our almost middle sixties. We love each other. Why would we wait to be together. What sign would we be looking for? Why would we let this time get away. Well, we are not waiting.

We both own our homes and just the other day, signed a contract to build in a 55+ community in Lockport, Lago Vista. We couldn’t be happier. I find myself smiling just thinking of our future together. We laugh all the time, love each other’s company and are really looking forward to becoming roommates.

Pat and I never had children, so the thought of grandkids was out of the question, but Lynda’s daughter, Meghan has a lovely, nearly two year old daughter named Ellie, with another on the way. She actually seems to like me.

It has been a while since my last blog, but I wanted it to be right so that those who knew and loved me and Pat can understand that she is not being replaced. Pat will always be part of me, but she had told me I would be fine once she was gone.

I know, it’s been awhile since I have put out a blog, but I have been busy…doing very little. In April 2021, I let everyone know that I had found happiness again! I have been with my girlfriend, Lynda, since August 2020. We are both very happy, looking forward to what the future holds for us. That future includes a new home, basically a new life for both of us. We are moving to a 55+ community in Lockport and are very excited about beginning the next chapter of our lives.  I say next chapter because, as most of you know, my first chapter lasted til October 10th of 2019, the day my lovely wife Pat left us. No one is ever ready to lose their loved ones and no one is prepared for how it will affect you.  It is difficult for anyone to move forward, continue living when your world comes crumbling down.  Pat and I were never blessed with children, even though we enjoyed sixteen nieces and nephews and five goddaughters. The possibility of having grandkids was never a thought, but now I have 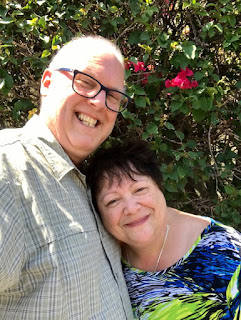 What a Horrible Day to Remember

It has been a year since the love of my life passed away. October 10 was the worst day of my life. That is the day Pat had had enough. Her body had battled as much as it could. Ovarian Cancer won the fight.  Now, after a full year, we are supposed to remember this date. Anniversaries are wonderful celebrations. Death Anniversaries are awful. A horrible memory of losing your loved one. She is no longer in constant pain, that is the only thing we can be grateful for. There were so many lovely memories of Pat for me and also for all of her many friends and family.  These are the things we should remember and smile about every time we think of Pat. How much she loved her friends, co-workers and family.  How, even in her months at the hospital and rehab facility, she loved her visits with her best friends. She always kept hope that if this could get better, maybe we could start another chemo treatment. It was not to be. Our trips to San Francisco, Monterey, Las Vegas and Scottsdale.  Our dr